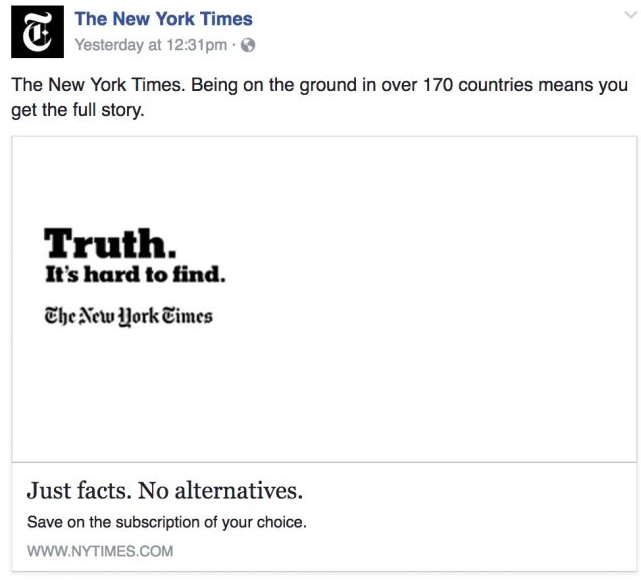 Language is a slippery thing. Case in point: the shifting use of the word “alternative.” There was a time when the adjective signaled thoughtful, if sometimes impatient, opposition. “Alternative press,” “alternative lifestyle,” “alternative rock,” “alt-academy,” even “alternative universe.” Each, in its way, spoke to power, expressing a desire for a more comprehensive worldview: reporting that took into account the disenfranchised, social movements that recognized the diversity of human experience, musicians who just wanted to do something different, academics who dared to apply their skills and training beyond the ivory tower, and fan fiction that upended received narratives. “Alternative” signaled exuberance, experimentation, commitment, and creative strength.

Today, the word signals simple mendacity, though of course there is nothing simple in how the discourse of the “alt” has been co-opted, bruised, and distorted, most recently by Kellyanne Conway’s reliance on something called “alternative facts,” but more perniciously by a white nationalist movement that has rebranded itself as the “alt-right.”

And while these are reprehensible examples of disinformation, we need to acknowledge that we too, as marketers, sometimes flirt with untruths or look the other way when persuasion drifts into prevarication. “Alt-marketing” indeed.

Working with integrity isn’t easy. But when journalists become fabulists, when museum directors bow to political pressure, when credible brands fail the public trust, we are all diminished–professionally, morally, imaginatively. What would it mean, then, to embrace an alternative view of marketing? One where inflated product claims were systematically challenged by product marketers? Where the measure of value was benefit rather than profit? And where that redefined “good” was widely dispersed instead of stringently controlled by market segment? Could “alt-marketing” survive in the current–or indeed any–business climate?

Granted, it’s a utopian, expansive vision, as most “alternative” visions are–or at least were, and, perhaps, can be again. At a time when civil rights in this country are being constricted, if not voided altogether, perhaps it’s worth taking an imaginative leap, if only to remember such leaps sometimes create change.